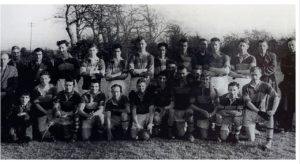 Inane Rovers is the only solely dedicated club to Gaelic football in the North division of Tipperary.  Serving the town of Roscrea and surrounding parish in the North Eastern end of the county, the club was founded in 1950 by a group of men whose passion for our national game motivated them to promote and develop the sport in an area dominated by hurling.

As the clubs first president T.F Gunnell once explained, ‘young lads from the area would gather in the fields surrounding the lodge of Inane House on the Limerick side of Roscrea to discuss the items of the day and test each other’s skills during a kickabout.’  These fields and lodge are represented in club  crest along with the lamppost on the Monastery Road where the first meeting of what was to become Inane Rovers took place on a winter’s evening in 1950.

The first formal meeting was held in Grimes’ Hotel (now Bernie’s Supervalu) on the 16th of January 1950, and the subsequent first match played was to defeat Clonmore in a challenge game at Clonakenny on a score line of 4 – 7 to 0 – 4.  Inane’s colours are green and gold and the jerseys are modelled on the famous Kerry style.

However an interesting detail from the clubs past is that this was not an arrogant statement from the founders but much more a result of chance.  A supplier of sports equipment in Roscrea at that time was J.J. Dooley of Castle Street.  J.J. had a set of jerseys in stock that had been ordered by another club in Tipp.  That club never turned up to collect the jerseys and as the story goes J.J. offered the set of green and gold jerseys to the club at cost price, to be paid for ‘whenever you can’.  And so the clubs colours were born and have been worn with pride by the generations of players since.

To read further on the article, visit https://tipperary.gaa.ie/tipperary-club-focus-inane-rovers/